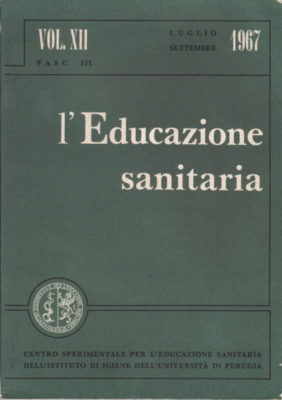 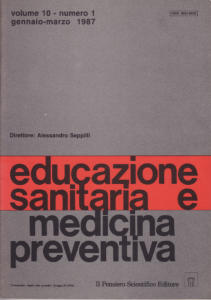 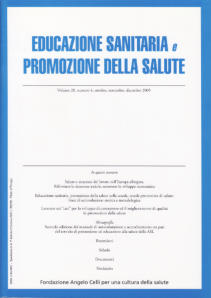 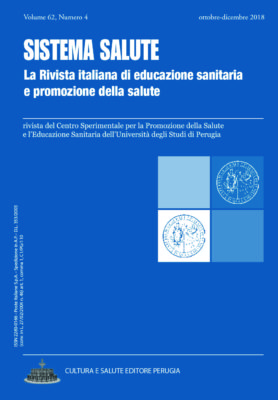 Since the fifties the journal has characterized at both national and international level the University of Perugia and the town itself in the field of health education, prevention and promotion.

The cultural development from prevention to promotion, accepting WHO’ s challenge Health in all policies, have accompanied the change of title:

In 1956 the journal L’Educazione sanitaria was created as the official magazine of the Experimental Centre for Health Promotion, under the auspices of World Health Organization and of the High Italian Commissioner for Hygiene and Health and was directed by Alessandro Seppilli.

“Health education is a social process tending towards a conscious and permanent modification of health behaviour which implied: (a) knowledge of the culture of the intended group whose subjective interests are to be thoroughly investigated, and (b) the overcoming of possible group resistances to the educational effort” (Seppilli A, 1958).

This definition originates from the first collaborations between hygienists and specialist in other disciplines (cultural anthropology) and incorporates some very important elements which aren’t in the concept of historical health and social action of the awareness of social action, and, as a result, of the importance of “culture” and of focusing on what can facilitate, or obstacle, changes.

In this first phase CSES and its journal played an active role in the movement for health reform. Within this context the law 833 establishing the National Health Service was enforced (1978). The role of CSES as benchmark for Italy has grown, also thanks to initiatives in cooperation with Region Umbria, which is one of the Regions that have best put into effect the National Health Service.

Since 1978, as the health reforms of second generation (Italy and Spain) entered into force and WHO became central in the movement for healthcare, the topic of organizing public health services – both at national and international level – has become more and more discussed in the journal.

The role of CSES increases also at international level: it hosts the European Office of the International Union for Health Education had its headquarters twice (1985-1991) and plays a crucial role in the organization of the first European Conference on Health Education in Madrid (1987) and the second in Varsavia (1990).

After the Ottawa Conference, in 1986, the journal joins the global cultural movement and the new public health strategy for health promotion. A revolution that brings the scientific perspective to studying health determinants“.

What builds health?” Ilona Kickbush wonders. As a result, the cross-sectoral perspective and the action of all sectors of society, according to the WHO’s suggestions Health in all policies, enlarge the interest of journal.

The focus of CSES shifted more and more towards health care strategies in which the individual is central and the community involved.

Health is created in the places where people live and work. Studies, research and experiences on settings such as workplaces, cities and schools were carried out.

The environmental issues became paramount and the journal started to deal with them.

Alessandro Seppilli established the Fondazione Angelo Celli per una cultura della salute, which currently publishes the journal, willing to continue promoting health culture with individuals and within the institutions.

In 2012 the last new title (Sistema Salute. La rivista italiana di educazione sanitaria e promozione della salute) towards the changes that subverted the world – as well as the health of populations, public health and health services. Towards globalization, most recent neo-liberal policies that worsened all the health indices of most countries of the world – with few exceptions -, surge of inequalities between and inside the countries, spread of new infectious diseases, the breaking up of whole social contexts, as well as the struggle between ethnic groups and religions.

Since then, the scenario has changed but hasn’t been studied and explored yet.

Health problems can be solved only by building networks among all the components of the increasingly complex modern societies.

Finally, the current title Sistema Salute. The subheading takes us back to our roots, as health education and promotion are still the basic topics discussed in the journal.

This continuity shows the history of the journal and of CSES of Perugia, as well as its aim of defending the right to health through the diffusion of studies, research and experiences.